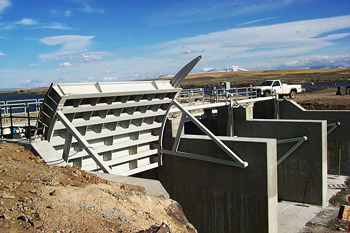 Radial Gates, also known as tainter gates (after the structural engineer who popularized them) are the most common type of spillway gate in use today.  It is classified as an undershot gate because water flows under the gate. It consists of a curved skin plate supported by a structural steel frame.  A hoist system is used to raise or lower the gate. 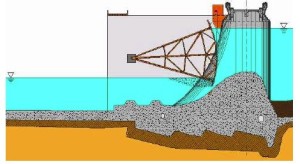 In a radial gate, water pressure is transferred from the curved face to the radial gate arms which transfer the load to a common bearing on either side of the gate opening.

Load combinations for water control gates can be complex and special care should be taken in identifying all of the important combinations.  Agencies will usually provide guidance (or rigid codes) on this but I will present here some of the most important ones:

Hydraulically, the gate is a sluice gate and should be designed as such.  You use the Bernoulli equation to equate the energy on both sides of the gate, which eventually results in:

This results in the downstream flow depth and velocity (b2 and h2), which you would use in the spillway or canal design.