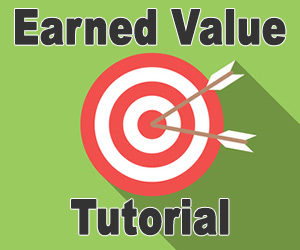 Effective earned value management requires the compilation of several pieces of information from the project.  None of these are difficult, but in some cases an organization doesn’t have the processes in place to effectively gather the data.

It is important to either have time & expense software that tracks actual project costs, or to have a manual substitute like collecting receipts.  In any case you need to know the actual cost of the project at the time of analysis (usually right now).  You also need to know the current status of each task, how much of it is complete, such as a percentage, number of hours, etc.

You don’t need to perform the analysis as of today’s date, but if you use an older date the project status will correspond to that date as well.  Normally the data is compiled at a status point, such as monday morning after employees have entered their time and expenses for the week.

The four pieces of information that the project manager must gather for each task are:

These are the inputs to earned value management.

They are gathered on a task by task basis, not for the overall project.  Although it is possible to use the overall project, this practice loses the main power of the method which is to show you which tasks are causing the schedule and budget problems.  That being said, it is better than not performing earned value at all.

This is very simply the budget of each task.  It usually doesn’t require much time to find because it’s determined during project planning and readily available.

Using our example task from the tutorial introduction, this step is very simple.  We will simply rename the budget column ‘BAC’:

There are several ways to assign earned value to a task:

For our example, let’s say that after discussions with the applicable project team members and inspection of the progress, we determine that the task is actually 20% complete.

We will add another column called EV to our table.

Let’s say that after reviewing our time and expense software and compiling any miscellaneous expenses, we determine that the actual cost of the task is $4,500.

We will once again add a another column to the table.

Those are the four variables.  It is not difficult nor time consuming, but you do need to have accurate cost tracking in place.

Earned value is a culture more than just a method.  Project managers should always be thinking in terms of the earned value progress.

The PV is the target, whereas EV and AC are the “darts.”  The AC and EV are always changing.  Every day another dart gets thrown at the board, and it’s the project managers job to keep AC and EV close to the PV. 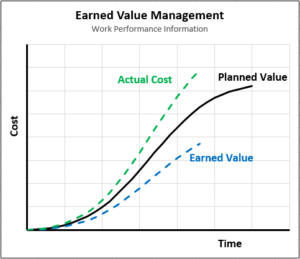 Note that the EV should be above the PV to be “positive” while the AC should be below the PV.  In this chart they are both showing negative.

Here are some typical project tasks and some guidance on how to assign PV, EV, and AC.

The following terms have been deprecated by the Project Management Institute and most other official project management bodies.  But since they are still being used in various places we will mention them.  The following are identical definitions:

As you can see, gathering the work performance information is not hard yet it can give you an excellent look at your project status.  But this is just the beginning.  On the next page we will determine how far the project is ahead or behind schedule, in other words, the schedule status.