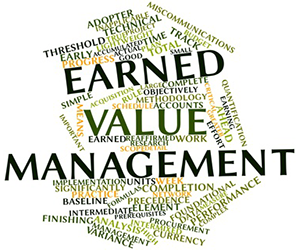 Schedule Variance, usually abbreviated as SV, is one of the fundamental outputs of Earned Value Management.  It tells the project manager how far ahead or behind the project is at the point of analysis (usually right now).

Schedule Variance represents the monetary value that the task is behind or ahead of schedule, relative to the task budget.  For example, let’s say the task Build Fence has a budget of $4,000 and the schedule variance is $1,000.  This would represent a project that is significantly ahead of schedule.

It must have a time point of reference, in other words, it is a “snapshot” at a certain point in time.  Whenever the project is active the schedule variance is changing.  To put it another way, the project is getting more ahead or behind schedule as time goes on and as work goes on.

In order to calculate the schedule variance, the project must initially be divided into tasks and each task must be assigned the following data:

Step 1:  Determine the percent complete for each task.  Since this is not a real project we have to assume the tasks are 75% and 10% complete, respectively.

We will add a column called PV.

Now we will add a column called EV.

The schedule variance is normally analyzed in conjunction with the cost variance (CV), which tells you how far over or under budget, rather than ahead or behind schedule, the project is.

How to Calculate Project Variance