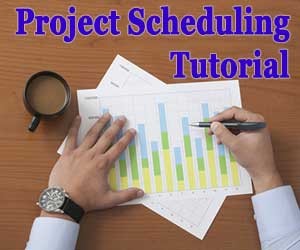 On the previous page we used a network diagram to determine the Early Start, Late Start, Early Finish and Late Finish of each task.  On this page we will draw the schedule in graphical bar chart form, which is called a Gantt chart.

A horizontal bar chart which depicts a project schedule is called a Gantt chart.  On the x-axis is the time scale, and the y-axis contains the various tasks of the project.

The time scale on the x-axis can be any units:  Days, weeks, months, or anything else.  It can also be non-time units, for example a political campaign could use the number of houses visited.  But the best units to use are virtually always days.  This is because:

It does not matter whether you use absolute units (actual calendar days) or chronological project days (1, 2, 3, etc.).

Let’s move back to our example log house project which we are scheduling in MS Excel.  On the previous page we determined the floats of each task, that is, the number of days they can move back and forth without affecting the critical path (i.e. the completion date of the project).  Each task was assigned an Early Start (ES) and Late Start (LS), as well as a Late Start (LS) and Late Finish (LF).

Firstly, each task is drawn on it’s ES date and the resources are plotted underneath.  The float of each task is usually drawn with a solid line underneath the task’s bar chart.  This is the initial schedule.

You’re most of the way there already.

The critical path tasks have no float and cannot be moved.  They are set in stone.

However, the non-critical path tasks have float and shouldn’t necessarily be placed on their ES date.  For small projects, they can be moved qualitatively by simply glancing through the critical path tasks that are being performed concurrently with the non-critical path task, and moving it to it’s least disruptive location.  You can also stretch it out (lengthen it), thereby using less resources per day.  If that is enough for you, then you are done here.  However, there is a better way.  Rest assured that once you get good at this, resource levelling is very quick and doesn’t take alot of mind power.

It would be a huge coincidence if we placed each task on its ES date and Bob were to be working the same number of hours per day throughout the whole project, but that’s ideally what we want.

In resource levelling, each task with float is moved to its ideal place within its float in order to “smooth” or “level” the overall use of project resources.  Have you ever had to utilize project team members on overtime only to see them idle a day or two later?  This is not efficient for the organization and projects should be planned to maximize the usage of their resources.

In the log house example, the red highlighted boxes show days where people are working more than 8 hours per day.  It is easy to see that the Landscaping task has a very big float and should not be completed at the same time as the Wood work.  In fact, Bill and Mark can (and should) be doing the landscaping during Electrical & Plumbing, because they are otherwise idle (or available to another project).  So we move the landscaping item to start on July 27, and then neither Bob nor Mark will be scheduled for 10 hour days.

Here is the final project schedule.

Did you notice how easy it was to see that you will need Bill and Mark, the laborers, for 9 and a half weeks, and Bob the foreman for 12 weeks this summer to build the log house?  All of the resources have been levelled, and proper estimation techniques have been used to provide a high level of confidence in this completion date and this usage of resources.

If you had not performed this scheduling exercise complete with resource levelling, you would have completed the project much later.  Bob and Mark would inevitably be working overtime one day and be idle the next.  Because Bob and Mark (and you) would be scheduling the next task as you complete the one you’re on, there would be inevitable delays.  And because you can complete the project sooner, maybe you can build one more log house per year, thereby allowing for a bigger bonus for all of you.

By the way, I am purposely calling a 4-6 hour day a full day because this allows Bob and Mark to call in sick, take vacation, or be needed on another project in a pinch.  I like to keep 6 hours/day as a practical maximum.  In some cases extra one-time hours have been assigned, such as Bob using 8 hours per day for two days while the crane is on site.  But this short burst of time is realistic, and can be sustainable when the rest of the task uses only 4 hours/day of his time.

Also, it’s easy to see when things are coming up, like scheduling the plumbers and electricians, or ordering supplies.  If you looked at this schedule every day throughout the project, you’d have everything under control.

Simple upgrades to this spreadsheet include adding contingencies, breaking down the supplies even further, and adding notes within the resources section like when to order supplies so that they are needed on the job site.

There you have it!

In reality, please don’t use my figures to build an actual log house because I’ve left some things out for clarity. In real life you will probably have a few more tasks like roofing, drywalling, painting, etc., and you will need the electricians to come back to hook up the light fixtures.  But if you are actually building a log house, or whatever your project consists of, start with this template and make sure all the tasks are there.

Good luck with your project scheduling!