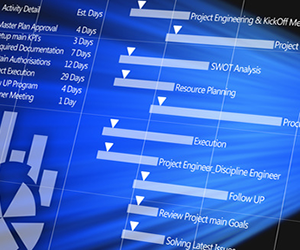 There are four types of task dependencies, and each one has its own specific reason you would use it.

In this relationship, task B cannot start until task A finishes.

This is the most common scenario and in the absence of any other criteria, all tasks could have this dependency in order to produce a functioning schedule.

In this relationship, task B cannot finish until task A finishes.

In this relationship, task B cannot start until task A starts.

In this relationship, task B cannot finish until task A starts.

This is a rare relationship but it happens:

Each task should have two relationships:

Once all the tasks in the project have their relationships established, the critical path method can be used to determine the minimum and maximum project completion dates, as well as float times for each task.  Task floats allow the project manager to see how far ahead or behind schedule a task can be without affecting the overall completion date.

In a hypothetical house building project, the dependencies would be listed on a predecessor table, like this:

Until now we have dealt only with mandatory dependencies, which is when the task relationships are physically absolute, or mandated by contractual or legal requirements.  You can also define discretionary dependencies, in which the relationship is not set in stone.  Why would you want to do that?

Using most project management software you can specify dicretionary dependencies and monitor progress against a “preferred” versus a mandatory schedule.

Dependencies also fall under the categories of Internal vs. External.

External dependencies should be avoided.  Many projects require approval from regulatory agencies or other external parties, and the addition of a task, let’s say “Environmental Review” or similar places the project in the unenviable position of being dependent on a third party.  You have to put a duration on the task, but how are you to know how long it will take the third party that has little interest in your project’s completion date?

Unfortunately this is a common situation and the duration must be estimated conservatively with, hopefully, expert advice.  During the project the third party task must be monitored.  When they miss their deadline the schedule must be changed immediately (multiple times if necessary), not when they finally come around to performing the task.

Sometimes there need to be gaps between tasks.

In theory, leads and lags are the same thing except for the direction from the reference point.  A lead is simply a negative lag, and vice versa.  It’s like using the identical terms height and depth.  In Project management software, you often have to enter leads as negative lags, because lags are more common.

All Tasks Should have a Dependency

The Project Management Body of Knowledge (PMBOK) states that all tasks should have a dependency.  This is because by definition, if a task is part of a project it must be related to other tasks in some way.  For example, the Eat Dinner task cannot start until Cooking is complete.

Of course, it is possible to draw a graphical schedule containing a bunch of tasks without any relationships between them, but this is a hypothetical scheduling exercise.  Professional project management requires the rapid determination of schedule impact from the many situations that occur during the project (not to mention effective project control).  Put another way, if you cannot answer the following questions you haven’t used project scheduling to its full capability:

Since projects are always changing and monkey wrenches have a pesky way of getting into the best laid plans, it is important to have a realistic and achievable schedule.  Which means the tasks should have relationships to one another.