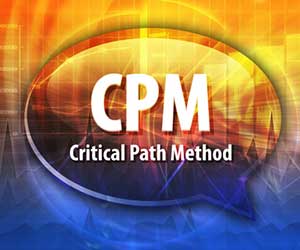 Making sure a project finishes on time is a core competency for all project managers.  Although it is partly an art form, the Project Management Body of Knowledge (PMBOK), the PMP exam, and  project management curricula all outline the science aspect.  If you know the science part well, you can practice the art form and deliver project after project without a sweat.

The science part is called the Critical Path Method.  It lets you set up a project and track it meticulously to give you project status reports that will give you early warning of budget or schedule issues.  This allows you to deal with them before they trip up the project, and with the following professional technique, it’s mostly effortless.

To perform the critical path method, there are 6 steps:

Divide the Project into Tasks

The first requirement is to divide the project into tasks, also known as activities.  Ideally, each task should have one responsible party and be easy to estimate.  For example, excavation and pouring concrete might have separate responsible parties (contractors, etc.) and should therefore be separate tasks.

Here’s a hypothetical task list for a driveway construction project.  This is often known as a “Dependency Table,” a “Precedence Table,” or a “Work Breakdown Structure.” 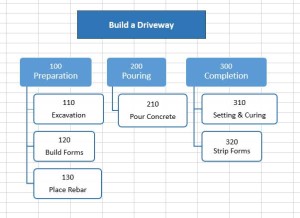 The task list can also contain “activity attributes,” which identify meta-level information about the task. For example, there could be a column called “Subcontractor”:

Once the project has been divided into tasks, each task must be estimated.  Two things need to be determined:

To estimate resources, here’s a typical table that would be produced for each task:

Resources can take the following forms:

It is not only important to know what resources you need, but what their minimum specifications are.  For example, you might know you need a crane, but how big of a crane?  (I’ve seen the wrong size crane arrive at a site – I’m sure that cost the project some monopoly money).  It’s not always so obvious though.  Maybe you need a new printer to produce a large report but you purchase one that prints too slow and it severely bogs down the production process.

Each resource contains a resource calendar, which is, like it sounds, a calendar which shows the availability of the resource.  Although the resources are finalized during the later step called Resource Levelling, one could spot the major gaps in resource availability at this step and set task durations accordingly.

Once this table has been produced, the durations must be estimated.  Each task has one duration estimate value, which can be added to the table:

Unless there’s a reason not to, use the units of days, not hours, weeks, cubic metres of excavation, or anything else.  The reason for this is that the graphical bar chart that is coming up in a few steps will require days as the x-axis, there is no other unit that works well.  Also, if the project deadline is defined as a day, as it almost always is, then project control will be very complicated if you’re tracking against some other unit.

This process is called Bottom Up Estimating, whereby each task is estimated individually and then aggregated into the overall project estimate.

Next, the network diagram is used to produce the following two pieces of data:

Of course, the graphical representation of tasks is also very helpful to envision the project and ensure the relationships between each task are correct.

In the absence of other project management software you could use Microsoft Excel to produce a network diagram, like this:

The Critical Path is defined as the longest path through the network, which means it defines the minimum completion date of the project.  During this step, the critical path and floats for each activity are determined, which is used to draw the gantt (bar) chart in the next step.  The steps are as follows:

The forward pass will determine the minimum project duration, which translates directly into the project completion date.  It is the EF (Early Finish) of the final task.

A horizontal bar chart that shows the start and end dates for each activity in the project is called a Gantt Chart.  It is the nicest, cleanest and easiest way to communicate the schedule but leaves out key information, like the critical path.

In the initial gantt chart the tasks are plotted on their Early Start (ES) dates.  The resources required for each task are plotted below the chart to show you how the resources are being used.  At this point, the resources might contain big swings in usage, for example, J. Blow is required to work 16 hours a day for 3 days and then has no work at all for the other two.  For most resources, their usage profile must be as flat as possible to minimize their cost, and that’s where resource levelling comes in.

Limited resources is a reality that nobody can escape.  Resource levelling refers to the act of moving the tasks backwards and/or forwards within their floats in order to flatten the peaks and valleys of resource usage (labor, materials, and equipment).  It is much better to use a person for 8 hours/day for two days than 16 hours one day and 2 hours the next.

The forward and backwards passes only tell you the float.  Resource levelling determines where within the float to put the task.

During this step, each area where resource usage has unacceptable peaks and valleys is inspected and tasks are moved within their floats to flatten the resource usage profile.  If the task is on the critical path and its start and end dates must change due to resources, the final completion date of the project must change.

Resources calendars which specify the availability of each resource are consulted to determine when the resources are available.  In general, there are three possibilities:

Items 1 and 2, where the finish date of the task does not change, are sometimes called Resource Smoothing instead of resource levelling.

Upon resource levelling you might have a completely functional schedule.  But it is often desirable to shorten a task in order to lengthen another one, or to move up the overall completion date.  For example, maybe Jon will be leaving for a tropical vacation and obtaining another laborer would incur significantly more time and expense.  When you need to shorten a task’s duration, you have two options:

Concurrent with these two schedule compression techniques, there are a few bigger picture options:

Schedule compression can be used when developing the schedule, but it is more often used during project execution when changes are happening and possibilities are being analyzed to determine an action plan.

Sometimes a project completion date is externally imposed on the project, for example when a stadium must be complete for the olympics.  In this case the standard scheduling methods described above still apply, only an additional sequence of steps must be performed.

It is essential to determine what features the software has.  It is not a safe assumption that all project management software contains all the features of professional project scheduling, like dependencies, floats, and critical paths.  In particular, most online web-based alternatives are relatively primitive in their scheduling capabilities.  If that’s all you need, then great, but if you are doing more sophisticated scheduling then consider Microsoft Project or an industry specific package.

Drop us a note in the comments to let us know how it works for you!

How to Calculate Critical Path