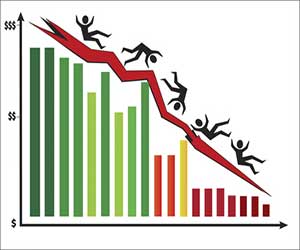 In a proper project risk analysis, once the risks to the project have been identified (step 1), their probability and impact given a value and an overall priority (step 2), risk responses are drawn up (step 3).

The corresponding response plan might include various cost saving measures aimed at keeping the well economic.

Scale to the Project

The risk management plan needs to scale to the project.  For small projects it might not be a necessity to have any response plans drawn up during project planning.  For medium sized projects several risk response plans might be developed.  And for megaprojects there are usually multiple response plans that have been well researched and communicated to the project team.

When you Need a Risk Response Plan

All risks fall within a continuum.  On the one extreme it does not affect the project enough to warrant tracking and monitoring.  In the middle, the event should be tracked and monitored but response plans do not need to be developed in advance.  And on the other extreme, the risk is substantial enough that a response plan needs to be developed.

Generally, risk response plans are required for risks that are high in both probability and impact.  For example, a nuclear power repair project might have response plans developed for radiation exposure events.

There are four possible ways to deal with risk.

The four risk response strategies can be applied to overall project risk as well.

Since there are two underlying factors to risk, probability and impact, each risk falls into one of the following four zones:

Parts of a Risk Response

There is no one correct way to generate a risk response, but here are several principles which can be used as a guide.  The risk response should be:

Implementing a risk response plan requires the appropriate levels of time and funding.  This should be planned for in the project budget or another strategy developed to ensure the project does not go over budget or behind schedule because of unforeseen events.

After planning risk responses, changes to other areas of the project management plan could be necessary, such as schedule, cost, and scope.

Because of this, the risk register and response plans should be communicated to the appropriate stakeholders in advance, i.e. during project planning.  Then, when an unexpected event occurs the stakeholders will not only be more supportive of the response, but the final judgment will be much more favorable.  The project manager will be off to a running start.

The Risk Management Approach in PRINCE2