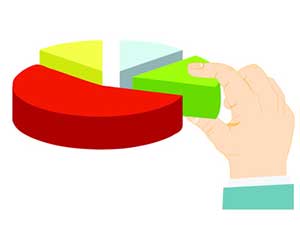 In the Project Management Body of Knowledge (PMBOK), the output of the Define Activities process is a Task List, also called Activity List.  The following might be a typical Task List for a driveway construction project:

The activity list also contains activity attributes, which identify meta-level information about the task. For example, there could be a column called “Subcontractor”:

Above are the official guidelines to choosing tasks.  The experience-proven rules of thumb which will help you to know when you are finished decomposing are:

Often there will be a well defined point during the project execution where a task will transition from “not well understood” to “well understood.”  Maybe some contingencies are needed to get to that point.  Notice that you’ve just identified the project risks, which is the first step in project risk management.  The risks should be well documented and communicated to the relevant parties, largely absolving the project manager of the potential negative consequences.

The PMBOK identifies a process called Decomposition, whereby the project activity list is developed starting from the top down.  Start with the project name or description, i.e. “Build a Driveway” and decompose it into phases.  Then decompose the phases into individual tasks.  If those tasks have further sub-tasks, break it down further.

The lowest level of the activity list should contain verbs, such as “Build Forms” instead of the significantly more ambiguous “Forms.”

The PMBOK contains two separate “processes” related to this:

The intention of the PMBOK was that the WBS contain project phases for the purpose of defining the scope, as opposed to the task list which is used in schedule development.  However, in practice these are generally one and the same.  The terms Work Breakdown Structure and task list are, in my experience, often used interchangeably.  I believe there is nothing wrong with this practice, as there only needs to be one official breakdown of the project work.  Tasks should be grouped into phases regardless of the WBS structure.

Project Schedule Management According to the PMBOK