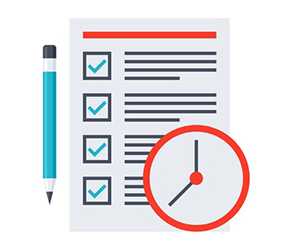 In the Project Management Body of Knowledge (PMBOK), the output of the Define Activities process is a Task List, also called Activity List.  The following might be a typical Task List for a sidewalk construction sub-project at the mega-airport:

A graphical style is sometimes helpful for presentation, but not a necessity: 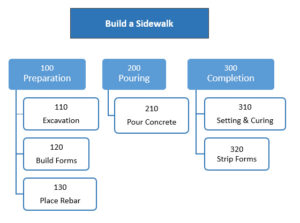 The task list also contains task attributes, which identify meta-level information about the task. For example, there could be a column called “Subcontractor”:

The task list developed using a process called Decomposition whereby the top level task is chosen first and then subdivided into smaller pieces:

In an ideal world, you would completely define all of the project work during the planning phase.  But since this is not realistic, you must get as close as possible as time and money allows.

Here are some experience-proven rules of thumb which will help you to know when you are finished decomposing:

Here’s another rule of thumb.  If you’re wondering whether to break down a task further, ask yourself these three questions:

Often there will be a well defined point during the project execution where a task will become well understood. For example, after you’ve built the concrete forms for the driveway, the amount of reinforcing steel becomes much better known than it was before. Maybe some contingencies are needed to get to that point.

If you, or a member of your team can reliably estimate the work on your own, you are lucky.  But most of the time some level of extrapolation is needed from other information sources.  Three sources that should be considered for every project are:

Each task should have written completion criteria which defines the completion of the task.  It is a common occurrence that a project manager feels a task is finished but subsequently sees time and materials charged to the task related to closing it.  Often final details need to be compiled and submitted, or the task paperwork needs to be assembled and filed.  Sometimes a walkthrough is necessary with a client, or a training session to teach clients to use the product.

In project management lingo, a task list is also called a Work Breakdown Structure, or WBS. Although the PMBOK differentiates between the two, in practice they are generally used interchangeably.

In the PMBOK, the task list is used for scheduling and estimating, while the work breakdown structure is used for scope definition. If you are managing a large project greater than, say, $10 million or 10,000 man-hours, you might need both of these separately.  However, small and medium sized projects can make do with one single task list, and these terms will be interchangeable.

Whether your project is a mega-airport or a small sidewalk, breaking it down into tasks is essential.  Starting well equals finishing well.  Good luck completing your task list and let us know if you have any other tips and tricks to help along the way.

Dividing a Project into Tasks

How to Create a Work Breakdown Structure