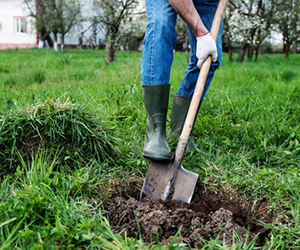 In the Project Management Body of Knowledge (PMBOK), the output of the Define Activities process is an Activity List, also called Task List.  The following might be a typical Activity List for a driveway construction project:

The activity list also contains attributes, which identify meta-level information about the task. For example, there could be a column called “Subcontractor”:

The above are the official guidelines for choosing activities.  The following are experience-proven rules of thumb which will help you to know when you are finished decomposing:

Here’s another rule of thumb.  If you’re wondering whether to break down an activity further, ask these three questions:

If the answer is yes to any one, it could be worth breaking down the activity further.

Another way to break down tasks is to ask whether the activity is:

Often there will be a well defined point during the project execution where an activity will transition from “not well understood” to “well understood.”  Maybe some contingencies are needed to get to that point.  Notice that you’ve just identified the project risks, which is the first step in project risk management.

Each activity should have written completion criteria which defines the completion of the task.  It is a common occurrence that a project manager feels a task is finished but subsequently sees time and materials charged to the activity related to closing it.  Often final details need to be compiled and submitted, or the task paperwork needs to be assembled and filed.  Sometimes a walkthrough is necessary with a client, or a training session.

The PMBOK identifies a process called Decomposition, whereby the project activity list is developed starting from the top down.  Start with the project name or description, i.e. “Build a Driveway” and decompose it into phases.  Then decompose the phases into individual tasks.  If those tasks have further sub-tasks, break it down further.

The lowest level of the activity list should contain verbs, such as “Build Forms” instead of the significantly more ambiguous “Forms.”

In practice, the terms Work Breakdown Structure and activity list are often used interchangeably, although the PMBOK distinguishes between them.  The PMBOK contains two separate “processes” related to the project activity list: