Once the individual tasks have been estimated, the Determine Budget process is used to roll them up into an overall project estimate, which is communicated to stakeholders.

In addition, the cost baseline, which is the periodic funding requirements of the project over time, are determined and approved by the funding authorities.

Determine budget is the process of aggregating the estimated costs of individual activities or work packages to establish an authorized cost baseline.

The individual task estimates are rolled into control accounts which track the actual expenses during the project.

The accuracy of the overall project estimate is the average of the accuracy level of individual tasks.  Larger tasks contribute more to the average.

Although bottom up estimating is more common, in some situations the overall project budget is determined in advance and must be allocated among the individual tasks.  This is called Top Down Estimating and requires a bit more savvy on the part of the project manager.

In the real world, each task has a minimum profitable budget.  If the top down estimate doesn’t allocate enough to a task to be able to perform it profitably, the overall project estimate must be revised.

Also, the allocation between individual tasks must be taken into account.  For example, if you have $1,000 to build a fence you must determine how much to allocate to the foundation and how much to the fence construction.  This is difficult to determine without more information.

For these reasons, a bottom up estimate might still be necessary, even in a top down situation.

It is prudent to include an amount for potential changes and extra costs that occur throughout a project.  Contingencies are included in individual task estimates to account for “known unknowns.”  That is, uncertainty exists around how many resources are required for the task or their cost.

Contingencies can be a percentage, or a fixed amount, or a calculation unique to the circumstances.

Contingencies are included within individual task estimates.  This is not to be confused with Management Reserves, which are included in the overall project estimate.

Management reserves are added to the overall project estimate, because you are not required to guess where in a project the issues are likely to arise.

Often, management reserves are specified by the organization based on previous experience, and the project manager has little or no control over them.

The project budget is the sum of all of the task estimates plus the management reserve.  This is the amount that must be set aside by the organization to perform the project. 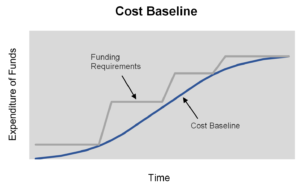 Funding requirements are negotiated based on the cost baseline.

Establishment of a cost baseline requires a functional project schedule.  If each task has a planned start and finish date, as well as an estimated budget, the cost baseline is readily available.

Net present value analysis can be used to convert the stream of cash flow back into today’s value.  This is often necessary for projects that last a long time and the money will be invested elsewhere until it is spent on the project.