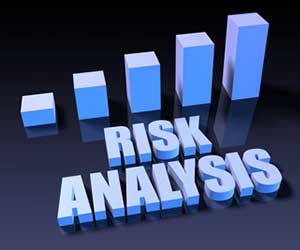 Risk analysis is an often omitted area of project management, probably because you can’t see its results in a direct way.  On top of that, small projects just don’t seem like they have the time and budget to justify the time spent.  But I would argue that analyzing risk is one of the easiest ways to prevent major headaches later on, and it pays for itself in costs that don’t appear but otherwise would.

On small projects, in fact, risk analysis can often be spread throughout many similar projects which incur the same risks, thereby reducing the cost per project.

During the initial Risk Identification step (step 1), a risk register was completed which was simply a list of the most important risks to the project.  For example, the initial risk register might look like this:

In this second step, the risks will be prioritized by their underlying factors, probability and impact.  More specifically, the following columns might be added:

From those, the highest priority risks will be identified for the third step, which is risk response planning.

It is okay, even recommended, that the original list have some risks that are determined insignificant and will be struck off.  The focus during the first step was on ensuring nothing was missed.  In our example we will strike off risk #3, because it is immediately deemed too unlikely to happen.

I know this is a funny example, but in real life you will have borderline items that aren’t nearly as obvious, and it is best to make sure you don’t miss anything.

We then proceed to risk analysis, which has two components:

In the qualitative risk analysis phase, a probability and an impact score is given to each risk.  Since risk has two components, probability and impact, both need to be considered.

Probability can be stated in percent or return period (eg. 6:1).  For smaller projects however, I suggest using a simple 1-10 scale.  The example risk register now looks like this:

The impact of the event is often easier to define but can be a range of possibilities rather than an exact number.  There are many different aspects of the project which can be impacted, but the most common are:

Impact can be stated in monetary terms (i.e. dollar, euro, etc.).  However, for small projects I would recommend simply using an empirical scale of 1-10.  The example risk register now looks like this:

My assumptions are that risks #1 and #2 will shut down the operation but risk #4 could result in partial success, hence the lower impact score.

The purpose of risk analysis is to determine the overall priority of a risk so that further action can be taken on the most important ones.  There are two primary ways to amalgamate the probability and impact into an overall priority:

In our example, since we used 1-10 rankings for both we can simply multiply them to get a priority:

Based on this analysis the weather (risk #2) should be the highest priority.  If the probability and impact are considered severe enough you might proceed to step 3, the preparation of risk response plans, for this risk and any other risk for which it is deemed appropriate.

Based on the priority of the list, the bottom risks can be removed altogether or added to a “watch list.”  The watch list could be looked at throughout the project to ensure they do not increase in probability and/or impact to the point of requiring response plans or other action.

The second component of risk analysis consists of turning the probabilities and impacts into quantifiable project budget impacts.  This is done via simulations such as Monte Carlo analysis and generally requires project management software.  Unlike the qualitative analysis, the probabilities must be in percent form and the impacts in monetary (i.e. dollar, euro) form.

In the simplest of quantitative risk analyses, a probability and impact can be multiplied into a contingency.

In a Monte Carlo analysis, the probability and impact are given a distribution (normal distribution, beta distribution, etc.).  Then, a random result is picked from the distribution to simulate the occurrence of the risk.  The actual cost to the project by the event is calculated, and the test is run many times which results in a distribution curve of the project’s actual budget.  Thus, it gives you a probability range of actual costs for the project, which is great for management presentations.  However, like any analysis it’s garbage in, garbage out, and the confidence level of the results are never better than the initial inputs regardless of how complicated a calculation was done to get there.