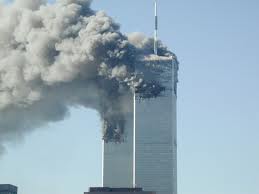 Recently I watched the latest documentary, called The Experts Speak Out, from the 911 Truth Movement.  Truthers, as they are called, believe that there is evidence that the World Trade Center buildings were most likely brought down by controlled demolition rather than weakness from the airplane’s impact.

Apparently over 2,100 architects and engineers have signed a petition to attempt to pressure the government to re-open the September 11 investigation.  This is not a big number, and it’s well within the range of engineer ‘conspiracy theorists’ but it got me thinking.

As an engineer, I will concentrate on the hard facts and evidence from the site to see what conclusions can be drawn.

The primary evidence from the documentary is given as follows: 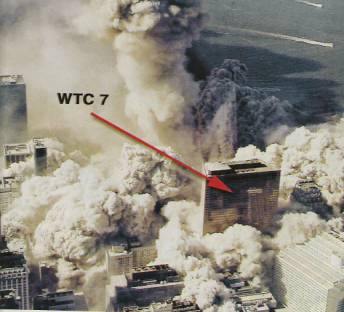 World Trade Center Building 7 was a 47 story, 610 ft tall office tower just to the north of the twin towers.  It collapsed completely at 5:20 pm on September 11 (eight hours after the main towers collapsed).  Just before the collapse, several amateur videos showed people on the ground hearing sharp explosions.

The real issue, to me is the foundation damage.  When the 110 story twin towers collapsed, it goes without saying that the foundation stability of the surrounding buildings was in question. Firefighters naturally searched building 7 and ordered people to evacuate.  A failure mechanism whereby the bottom columns collapse, essentially causing the whole building above it to fall and setting the chain reaction in motion, is quite plausible to me.  It seems unlikely to me that the implosion would be as uniform as it was (the roof of the building remains quite level throughout the collapse) but this is certainly within the realm of possibility.  Also, the explosions heard by nearby spectators could well have been columns failing.  All of us who went through engineering school have seen the concrete cylinder tests which are so loud you need to wear earplugs – for a 6-inch diameter cylinder, much less building columns for a 47 story building. Of course, the building’s structure was steel, not concrete, but my point is that the failing structural members could be mistaken for explosions.  In fact, the amateur video shown in the documentary sounds alot like failing structural members to me, not controlled demolition explosions.

In all of my “internet research” I could not find a place where the truthers talk about the building foundation.  They spend all their time criticizing the official report which talks about “office fires” as the cause of the destruction of Building 7.  To the discredit of the National Institute of Science and Technology (NIST) which authored the report, the collapse of Building 7 was not due to office fires.  But to the equal discredit of the truth movement, the real issue is foundation damage which is being ignored.

This is the most believable of the truthers arguments.  But although a casual look at the video of the collapse of World Trade Center Building 7 does indeed look like a controlled demolition, I would submit that the a heavily damaged foundation is still the more likely explanation.

The following is a summary of the arguments made in the documentary, courtesy of whatreallyhappened.com:

In perfect conditions the maximum temperature that can be reached by hydrocarbons such as jet fuel burning in air is 1520° F (825° C). When the World Trade Center collapsed the deeply buried fires would have been deprived of oxygen and their temperatures would have significantly decreased.Why was the temperature at the core of “the pile” nearly 500° F hotter than the maximum burning temperature of jet fuel a full seven days after the collapses? There were no infernos in either of the twin towers before they collapsed, so what caused the hot spots deep in their wreckage?

Conventional fires cannot account for the above, but thermite can.

A thermite reaction generates extraordinarily high temperatures (>2500° C) and provides a credible explanation for the fires, hot spots and molten steel (a by-product of the thermite reaction) found in the collapsed buildings.

I can’t agree with this logic.  When a 110-story building collapses, the temperature inside the debris pile is going to be very, very hot. Not from jet fuel, or thermite (more on that later) but from the friction of concrete, steel, and everything else as it collapses.  How long will it stay hot?  Well, maybe months.  That’s pure speculation.

The behavior of the towers was as expected, and there is no need to grasp at exotic theories to explain the temperatures.

Thermite In the Debris Pile 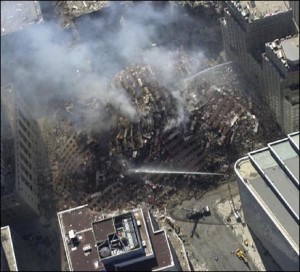 Thermite is a compound of iron oxide and aluminum.  When heated to about 650oC, the two components react which creates more heat, an exothermic reaction that heats up to 3,000oC (enough to melt steel).  This is the balanced reaction equation:

Because this reaction supplies its own oxygen (from the iron oxide), the documentary argues that thermite could have been placed on the center supporting columns during elevator shaft maintenance prior to September 11, and thus account for the molten steel that was hot for months deep down in the oxygen-starved debris pile.  According to the documentary, independent scientists have collected samples of nano-thermite from the dust near the World Trade Center.

Were the buildings brought down by thermite, which melted the steel columns before collapse?

I can’t agree with this logic either.  The elements involved in the above reaction are iron oxide and aluminum (the documentary also talks about sulphur as part of a military grade “thermate” found on site).  These are hardly rare, exotic minerals.  The collapse of a building of this size is likely to produce those elements, either directly from it contents, or via the reaction of other elements inside the building as it fell.

The violence of the collapse, crushing of contents to a pulverized state, and powerful physical interaction of elements, all amid extreme heat probably initiated many different chemical reactions.  Thus, to conclude that the presence of iron oxide, aluminum and sulphur in a debris pile from the collapse of a 110 story building must be from thermite is also a big stretch.

I believe that the “nano-thermite” material found on the street below was probably created by the collapse itself.  From iron and aluminum building parts, oxygen, extreme heat from the jet fuel at impact, and who knows what else, chemically speaking, happened during the collapse, these relatively common minerals ended up in the “nano-thermite” state they were found in.

I’d love to hear your thoughts about how the World Trade Center buildings collapsed.  Enter your comments below.