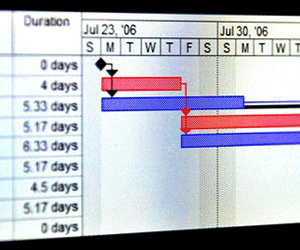 If I told you to change a light bulb and you had two hours to do it, you would probably spend most of the two hours.  You’d assume I thought you needed to go the store, or that I wanted it done a certain way, and that I’ve thought hard enough about it that you should take the two hours.

In project management, this human phenomenon, that work tends to fit into the space assigned to it, is a problem.  Creating factors of safety within project schedules often does not reduce the risk of finishing late.

Most people are influenced by one or more of the following human factors:

Traditional project scheduling would include factors of safety in each task (schedule and cost), which then encourages the project members to complete the task in the amount of time allocated to it.  The likelihood of being late is only marginally improved by adding large factors of safety.

What is the Critical Chain?

Purely by definition, the Critical Chain is the same as the Critical Path in traditional project management.  It is the longest path of tasks to project completion.  But in its calculation and methodology, it is a completely different method.  You must essentially use one method or the other, or both in parallel if you have the time.

How to Implement the Critical Chain Method

To use this method, a project manager performs the following sequence of events.

The project team is aware of the buffers but is driven by the task durations which are the 50% estimates.

Even though they are aware of a buffer, the schedule presented to them forces them to act with a sense of urgency.

If you would like to know more about the Critical Chain Method, here are a few resources to investigate: