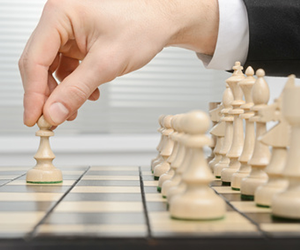 Corporate Strategy refers to the methods with which an organization achieves its goals. In the world of corporate strategy, the development of strategy is the third in a three step process, in this order:

A Corporate Strategic Plan should be developed which summarizes and, where necessary, explains the strategies by which the organization will achieve its goals.  With a clear picture of where it intends to go (goals) an organization performs a strategic analysis to determine its strategy.  A strategic analysis consists of the following steps:

This is a great tool to quantify the external factors that affect an organization. Most of the time these are out of the control of the organization and thus represent an external risk that should be mitigated.  The acronym PEST stands for:

This is an excellent tool which focuses on how activities within an organization create value for customers.  It includes three steps: 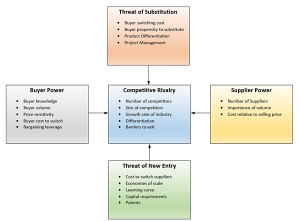 Michael Porter of Harvard Business School developed this technique in 1979.  It’s a fairly simple way to analyze the competitive position of an organization.

Porter figured that there are five forces that essentially define the attractiveness of a market for the purposes of doing business.  These five forces are:

This tool focuses on analyzing competitors to glean their potential future strategy.  Things like:

The four components (corners) involved in the analysis are:

I hope this doesn’t sound too obvious, but one thing I can safely say about analyzing the competition is that when a strategy is working, one can assume they will not make in significant changes to their course. 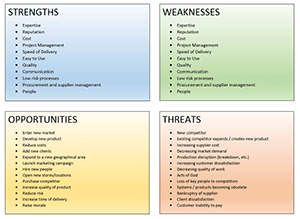 The acronym SWOT stands for:

A SWOT analysis investigates each of these factors and plots them on a 2 x 2 matrix, like our example above.

War gaming is an attempt to replicate a strategic move in a no risk environment.  A “team” is created for your organization and one competitor (or several).  Each team gets a few members, but 2-4 is a good  number.  To be most effective, each team should have a diverse range of functional managers.  There should also be a facilitator to oversee the contest and ensure that the strategies used are acceptable.

The ball is passed back and forth between the organization and its competitors, and each team considers and submits its next move.  If the organization is holding the war game to analyze a potential strategic move, that is the natural first move.

As you can imagine, war gaming results in an intense analysis of the competitors next move, which is the intent.  Once it is complete, everyone has a good idea of the strengths, weaknesses, and likely responses of the organization’s competitors.  And this aids in decision making by the executive team.

A Walk Through the Strategic Planning Process

5 reasons why you need to be familiar with Corporate Strategy

27 Ways to get a Competitive Advantage

10 Parts of a Strategic Planning Template