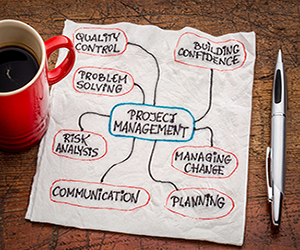 The Two Types of Float

There are two types of float:

The reason there are two types of float is because a delayed task is probably not a concern if the next task is able to “absorb” the delay.  Future tasks are delayed in a domino effect, but unless the delay reaches the total float, the overall project completion date is unaffected.

That being said, traditional network diagramming techniques use the total float, so project management is normally based on the total float, while free float is not used unless it is necessary.

Total float is calculated using a network diagram.  Although there are a few steps, network diagrams are not very difficult to produce and a simple step by step process is not hard to remember.

Step 1: Divide the Project into Tasks

The project is subdivided into its constituent tasks.  This is usually called a Work Breakdown Structure (WBS), although the Project Management Body of Knowledge (PMBOK) differentiates between a WBS and an Activity List.  The WBS is actually a deliverable-oriented subdivision of the work, focusing on the project deliverables rather than strictly tasks to be completed.

Make sure each task represents one interrelated unit of work.  If you have too many tasks, it becomes burdensome and micromanaged.  If you have too few tasks, there is little point in creating a network diagram because large, unrelated work is managed within the same task.

Once the tasks are chosen, the network is created by way of task dependencies, that is, each task’s predecessor tasks are determined.  For example,

Once the task durations are entered, it’s time to proceed to the forward pass.  I’ll walk you through this step by step.

The grand result of the forward pass is the completion date of the project, which is the EF (top right box) of the final task.

The step by step instructions are:

In this example, the project completion date is on day 17.

To perform the backward pass, do the following step by step procedure.

Finally, we’re getting there.  The Total Float is simply the bottom boxes minus the top boxes.  It doesn’t matter whether the left or right side is used, the result will be the same.

A few conclusions from the example:

The float calculated on the network diagram is total float, not free float.  This means that the float is for that branch of the diagram, not the individual task.  For example, if Task A is delayed by 5 days, it has gobbled up Task C’s float as well.

How to Calculate Critical Path