Six Sigma was a powerful quality improvement system developed by Motorola that took the world by storm in the early 2000’s with high profile adoptions by General Electric, Honeywell, and others.

Together, according to one of the first consultants to promote Lean Six Sigma, you could

Clearly there are some lessons to be learned by project managers from Lean Six Sigma.

Six Sigma is a method that measures the variation of the outputs of a process, say the manufacturing of a widget.  It measures the deviation of the outputs from a specified quality target, and uses Six Sigma “projects” to improve the process to reduce variation.  The goal is to get the process output variation to within 3 standard deviations from the mean in either direction, hence the name Six Sigma.

Lean looks at the manufacturing steps of the widget.  Rather than the old way of trying to maximize the uptime of expensive machinery, Lean changed the focus to the products.  In Lean, the products are to be kept moving constantly through the assembly line, even if it means machines are idle.  Idle products are to be minimized rather than idle machinery.  This means that parts inventory was reduced to only what was needed at the time at each step (“just in time production”), and the value stream which considered the processes that add value to the product, were optimized rather than machine efficiency.

Because slow processes are expensive processes, the combination of low inventory and fast payment by customers for products that needed a fraction of the time to get from initial raw materials to finished product, create substantial financial gains.

Lean Six Sigma is the combination of the two.

One Widget Instead of Many 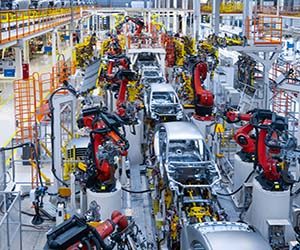 It’s easy to look at the Project Management Institute’s definition of a project to figure out how it differs from manufacturing:

Unlike manufacturing, the project manager is concerned with a production line that produces one item, or just a few.  For example a building, a piece of software, or an organizational improvement project – there’s only one widget being produced.

Projects also have defined beginning and end points, whereas manufacturing seemingly goes on forever.  But I would argue that in manufacturing the break even cash flow point of the investment in the plant infrastructure is an important consideration in the investment decision.  You have to sell so many widgets to make it work, that’s the end point.  Hence the only difference between projects and manufacturing is a single unique product versus many.

Outside of that, however, there isn’t really that much difference between a manufacturing plant and a project.  Certainly, most project managers want to produce quality, quickly.

By definition, Six Sigma requires the production of many widgets to glean the data as to what the variation in results is, and how it occurs.  But the concept is fully transferrable to project management.  The owner or project sponsor has an expectation of a quality level, and that is the quality target.  You must know what that quality target is and recognize that variation from that quality target happens whether you try to control it or not.

In essence, there is only one chance instead of many to hit the target, and it must be within 3 sigmas from the mean or else the project is considered a failure.  The project manager actually has the harder job than the manufacturing plant.

But because there is only a few (or one) owner, project sponsor, or otherwise people who define the successful quality level, it may be prudent in a one-widget scenario to establish the quality criteria at the outset.  The project manager might define quality different than the customer, and finding out the difference is best not left until the single widget is already produced.

Lean manufacturing turned the focus around, from keeping expensive machinery running at maximum capacity, to keeping products moving and being value-added at maximum capacity.  The only inventory in the plant is that which is necessary to keep the product flowing.  Thus, it was originally called Just-in-time manufacturing because every production step was given the needed inventory that day or only a few days.

Each production step is designed to require an equal length of time (where possible) which allows the product to go directly from one step to the next, without stopping.  Hence the product would move through the plant at a rhythm, which is called the takt time.

What Can Project Managers Learn?

Since a project is really just a manufacturing plant with one widget being produced, there are plenty of similarities between projects and manufacturing operations where Lean Six Sigma can be implemented successfully.

Lean Six Sigma has changed manufacturing, and project managers are well advised to heed the reasons for its success.