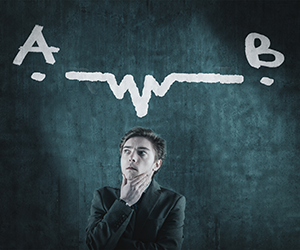 Three point estimating is a technique which utilizes an optimistic and pessimistic estimate to determine the ideal estimate value for a project task.  It is a shoe-in for PMP exam questions, which is not likely to change anytime soon.

It allows known risks to be quantified and built in to the project budget.

There are two generally accepted formulas for three point estimates:

The simplest three point estimate is the simple average of the three values (known as the triangular distribution):

The beta distribution places the final estimate closer to the most likely value:

The triangular distribution is the default and should be used if there is no reason to use anything else.  The beta distribution should be chosen when there is more confidence in the most likely value, that is, where the final estimate should be tighter to the mean.

The key benefit of three point estimating is the way it takes into account project risk.  The following procedure is how it works, PMBOK-style.  From the very beginning:

There are many situations where a risk results in a skewed distribution.  For example, a risk might result in a cost escalation but no corresponding cost reduction if it doesn’t occur.  This would make the Pessimistic estimate farther away from the Most Likely value than the Optimistic one (that is, the Most Likely value is not directly in the middle) and result in a skewed distribution.

Three point estimating is one out of three estimating methods which are applied at the individual task level.  The other two are:

These methods apply to individual tasks and are thus contained within the PMBOK‘s Estimate Costs process.

Good luck with Three Point Estimating on the PMP exam, and let us know in the comments if you have anything to add!