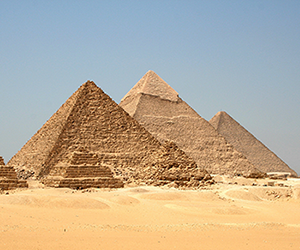 Top Down estimating is a project estimating technique whereby the overall project is estimated first, and individual tasks are apportioned from it.  You start from the top of the pyramid and work downwards.

This type of project budgeting usually occurs when there is a fixed budget and/or the scope of the project must fit within a predetermined funding level, particularly when projects aren’t blessed with the resources of King Tut’s afterlife.

Top Down is the opposite of Bottom Up Estimating, whereby individual tasks are estimated first and “rolled up” into the overall project estimate.

In the Project Management Body of Knowledge (PMBOK), there are three estimating levels which are used for individual tasks:

It may seem like hieroglyphs, but three point estimating is a powerful method that takes into account project risks, and can be used in conjunction with the other two.

These methods apply to individual tasks and are part of the PMBOK’s Estimate Costs process. Once each task is estimated, the overall project budget is determined using the Determine Budget process.

The Determine Budget process contains the procedures to roll up the individual task estimates into an overall project budget.  Top Down Estimating is one of two procedures for this process.  The other one is:

Bottom Up Estimating is more common, because Top Down is largely restricted to situations where a budget has been determined in advance and the project manager must determine the project scope that fits the budget.

In conclusion, keep the mummies in their tombs by using top down estimating to determine project level estimates first and then apportioning it down to the individual task level estimates.