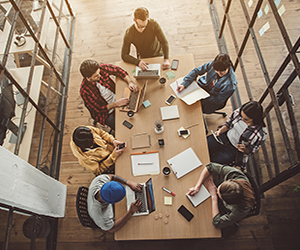 A common way to differentiate between business organizational structures is between ongoing operational work versus capital projects.  Operational work maintains an existing sales channel, whereas projects are one-time, unique expenditures with a defined budget, beginning and end dates, and they accomplish a specific goal.

There are four types of organizational structures, each of which has their own unique set of influences on the management of the organization’s projects:

Most organizations are divided along functional lines, that is, each “division” is organized by work type, such as engineering, production, or sales. 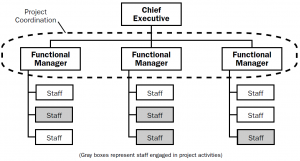 In the functional organizational structure, projects are initiated and executed by the divisional managers, who assume the project manager duties in addition to their regular, functional, roles.  They are often given secondary titles such as “Coordinator of Project X.”

In this structure, project managers usually don’t have alot of authority to obtain resources or to manage schedules and budgets.  They must obtain approvals to utilize resources from other departments, which can be a complex undertaking.  This is because the functional organization is designed to focus on the provision of the divisional services rather than project deliverables.

On the other end of the scale is the project-oriented organization.  These companies do most of their work on a project basis and are therefore structured around projects.  This includes construction contractors, architectural firms, and consultants. 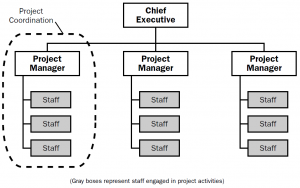 Project managers are usually full time in the role, and for small projects they might manage several projects at once.

In this structure project managers usually have a great deal of independence and authority.  They are able to draw on resources with little required approval.

In fact, most of these types of organizations have some form of functional divisions which are placeholders for resources that can be utilized by all projects.  They are usually called “departments.”

For example, at an engineering firm the geotechnical department is available as an expert resource to all projects within the firm.

Although the project-oriented and functional structures are at opposite ends of the spectrum, it is possible to be located somewhere in between (a hybrid).  In fact, most organizations are along some level of the spectrum, utilizing a structure that gives project managers a bit more authority without losing focus on the provision of functional services. 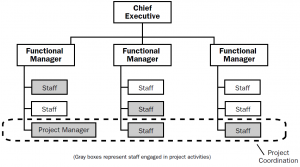 In the typical matrix structure, a project manager is assigned from within one of the functional departments in either a part time or full time capacity.  They are assigned project team members from various departments, who are released from their departmental duties (at least partially).  Thus, a high priority can be placed on the project while maintaining the functional division services.

However, the project manager and team members are still paid by their respective functional departments, thus the final accountability for the project still lies at the functional level.  For example, if one of the department managers thinks that they have contributed more than their fair share, the project will stall quickly.

From a theoretical point of view, there are two more adjustments that can be made.  A weak matrix retains the management of the project in the hands of the functional managers instead of the project team, like this: 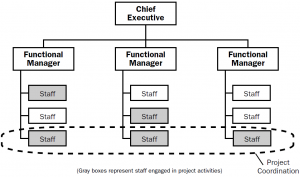 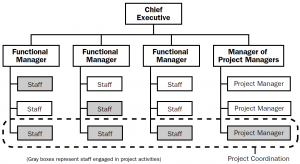 This project management arm often takes the form of a Project Management Office, or PMO.

In spite of its name, the terms strong and weak matrix are not meant to imply a level of desirability to the organization.  The names have been coined by the project management industry which has studied the role of projects within organizations, and hence they correspond to strength or weakness in achieving project success.  But if that comes at the expense of poorer delivery of functional services, the organizational’s goals are not necessarily being achieved.  Hence, the correct project organizational structure is one which achieves the organization’s goals, and this can fall anywhere along the project/functional spectrum according to the specific needs of the organization and/or project.

Functional organizations and project-oriented organizations are at opposite ends of the spectrum and matrix organizations fall somewhere in between.  But it is possible to utilize both structures at the same time.  Therefore, there is a fourth option that requires mention, the composite structure. 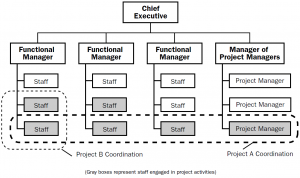 This occurs when a project structure and a functional structure both report to a central executive.

For example, a state government department of transportation has a maintenance division which seeks to maintain the level of service of the state’s roads and bridges, and a capital projects division which builds new roads and bridges.  The maintenance division and the capital projects division are located side by side, reporting to the executive.  This is a composite organizational structure (A matrix structure would require new construction to occur within one of the maintenance departments – the project manager would report to a functional manager rather than the executive).

Most organizations lean one way or the other rather than using both structures, because of the drastically different management styles necessary to perform each of the roles well.