Every project has distinct roles that must be fulfilled in order to function properly and provide the products or services it was intended to provide.

As a minimum, it needs a project manager and a project team who does the work, although those roles could be fulfilled by the same person.  It also needs a connection to the larger corporate body who ensures funding is available and accepts the project’s deliverables – called a project sponsor.  But the larger the project, the more roles there are.

The following ten project roles exist in every project.  In theory, all of the roles are present in all projects although one person could fulfill multiple roles. 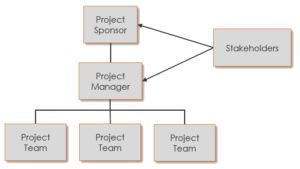 The most basic project organization chart

The project manager reports to the project sponsor, who manages project funding and accepts the project’s deliverables.

The project team, who carry out the technical work, report to the project manager.

Project success is defined as satisfying all critical success factors for the project, which should normally be identified at the beginning of the project.  For example:

A project manager’s antithesis is a functional manager (department head) who oversees a division that produces an ongoing or operational product or service.  Since a project is defined as an undertaking with a distinct beginning and end producing a unique result, the project manager is overseeing a temporary business initiative that exists beside the normal operations of the business.  However, some businesses are project-oriented in nature, where the business performs only projects (construction firms, etc.) in which case the project managers have no equivalent department managers.

The project manager’s role includes a strong element of leadership, including the development of a vision for the project and motivation of the project team to accomplish the vision. 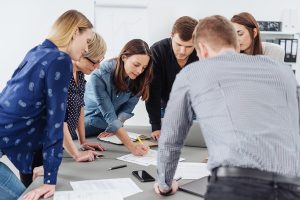 The project team carries out the project’s technical work.  They produce the deliverables that the project was commissioned to produce.  They perform the project tasks throughout the execution phase. 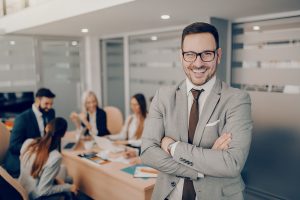 The executive is above the project.  Their interaction with the project is usually through the project sponsor, but we include it here because it is an important role in the organizational structure.

The executive, in turn, makes decisions (particularly financial ones) which may affect the project. 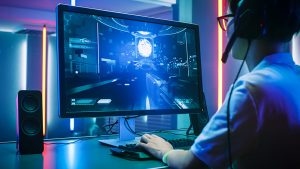 Sometimes there is a different end user than the organization who initiates and pays for the project.

For example, software projects are initiated by an owner (the software firm), but the end users are the customers who pay for the software.  Hence, if the project is not keenly aware of the end user’s needs and design/build the project accordingly it is not likely to be a success.

Many projects have external stakeholders that have power or influence over the project.

For example, surrounding landowners, affected businesses, or even the general public (for a road construction project) have a say in how the project is executed, including budget and schedule implications.

In the PRINCE2 methodology, a project assurance role is the responsibility of the project board.  This role involves monitoring the project’s quality activities to ensure the quality standards are being achieved.  It also involves providing advice to the project manager regarding decisions involving the specifications or function of the product or service.

The project assurance role is above the project manager and does not directly manage project functions.

Many organizations now have a project management office (PMO) which provides the role of project support.  The PMO’s authority can range from providing advice to complete management of project functions.

The most controversial part of most projects is when they change.

Something occurs that requires a change in the budget, schedule, project team, quality, risk, or any other aspect in mid-project.  Often the change is accompanied with a significant amount of grief.  The stakeholders must agree on the project change, and the project management plan must be changed and approved by all stakeholders.

The “change authority” is often the group consisting of the project manager, project sponsor, and executive, who together have the authority to define and approve the change.  But the exact makeup of this group varies by project and organization.

The 9 Project Roles in PRINCE2

10 Roles and Responsibilities of a PMO

The 14 Most Important Roles of the Project Manager

30 Roles and Responsibilities of a Project Manager