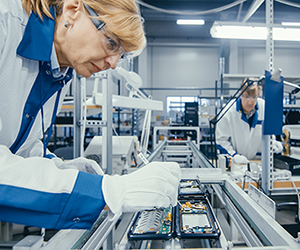 Jidoka is the ability of machines and assembly line workers to detect when a quality non-conformance issue has occurred and immediately stop the production line to make the necessary improvements to the process.  Jidoka originated in the Toyota Production System, where it was not just the worker’s right to “pull the cord,” but their responsibility.

Far from leaving the inmates in charge of the asylum, jidoka was one of the main reasons why Toyota was renowned for high quality products.

Jidoka was one out of two pillars of the Toyota Production System, the other being just-in-time production. 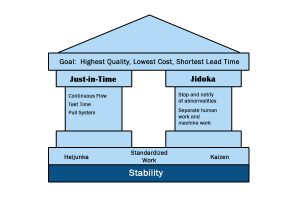 After Toyota emerged from the second world war in ruins to become the world’s largest automobile manufacturer in the 1990’s, many people tried to determine the secret to their success.  Today, the study of this success has developed into the modern methodology of lean manufacturing.

Modern jidoka is done mostly by machines, which perform an inspection or quality measurement prior to releasing the product to the next manufacturing station.

Jidoka should be implemented as part of a system, normally that of lean manufacturing.  As I describe below, the lean manufacturing methodology is ideally suited to jidoka, and they should not be considered in isolation.

There are three benefits to jidoka:

Jidoka’s origins date back to the early twentieth century, when Sakichi Toyoda (prior to founding the Toyota Motor Company) used a textile loom that, when a thread broke, spun itself out wasting copious amounts of material.  He invented a machine that detected the broken thread and automatically stopped the machine, preventing the waste.

Toyota coined the term autonomation, which means automation with human intelligence, to represent the machine-based jidoka actions which have largely, but not completely, replaced human jidoka.  Although humans can, and do, still “pull the cord,” autonomation represents the machine inspection of parts prior to release to the next production step.  Just like the automated textile loom which shut down upon the break of a thread, modern assembly lines should strive to monitor the product and shut down the assembly line if quality metrics are not met.

Andon, japanese for “lamp,” refers to a notification to workers or management that an abnormality is occurring in the production process.  This can be a result of:

The simplest andon is a light that turns on when a problem occurs. 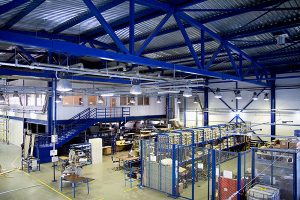 Today jidoka is a component of lean manufacturing.  This methodology seeks to minimize the length of time a product takes to proceed from raw material to finished good.  Once a raw material has entered production, it should not stop until the finished product is completed.  This is in contrast to traditional manufacturing which seeks to minimize the downtime of machines and people.

There are five core principles in lean manufacturing:

Jidoka is not a strategy meeting or budgeting session.  It requires the ruthless, total elimination of all waste.  Where waste is identified, the patient is in critical condition and urgent action is necessary to resuscitate it.  Anything less is not insufficient for the criticality of the situation.