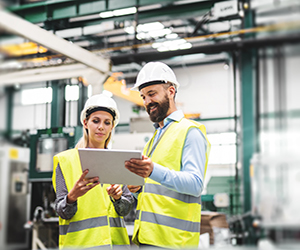 The synergy of both is the most powerful engine available today to sustained value creation.

Six Sigma was developed as a quality improvement system by Motorola and gained widespread traction in the 2000’s with high profile adoptions by General Electric, Honeywell, and others.  Lean originated out of the Toyota Production System and became widely popular as a system of creating value through rapid, agile production techniques.  But fusing the two together allows you to produce high quality things quickly.  The combination is truly powerful.

It was only a matter of time until the Six Sigma and Lean movements of the 2000’s merged together to form the Lean Six Sigma philosophy used today in most production facilities, but also many other businesses.

The first half of the process, Six Sigma is a method that measures the variation of the outputs of a process, say the manufacturing of a widget.  It measures the deviation of the outputs from a specified quality target, and uses Six Sigma “projects” to improve the process and reduce variation.  The projects are structured around the acronym DMAIC (pronounced “De-may-ic”) which stands for Design – Measure – Analyze – Improve – Control.  The goal is to get the process output variation to within 3 standard deviations from the mean in either direction, hence the name Six Sigma.

The other half of the process, Lean, turned manufacturing upside down.  Rather than making sure the factory’s machines were running at maximum capacity, Lean changed the focus to the products.  In Lean, the products are to be kept moving constantly through the assembly line, even if it meant machines were idle.  Idle products were to be minimized rather than idle machinery.  This meant that parts inventory was reduced to only what was needed at the time at each step (“just in time production”), and the value stream which considered the processes that add value to the product, were optimized rather than machine efficiency.  Because slow processes are expensive processes, the combination of low inventory and fast payment by customers for products that needed a fraction of the time to get from initial raw materials to finished product, created vast financial gains.

Lean Six Sigma then, is the combination of the two.

The DMAIC process improvement project system is adopted from Six Sigma, as are the Green, Black, and Master Black Belt specialists.  The Six Sigma practitioners focus on the Lean concepts of value stream mapping and process cycle efficiency, that is, minimizing the amount of time that product is idling on or beside the assembly line (or maximizing the amount of time a product is being worked on in a value added way).

Also inherited from the Six Sigma side is the concept of organizational culture change.

Six Sigma has as a central foundation the change of organizational culture to the new processes, and Lean Six Sigma retains this focus. 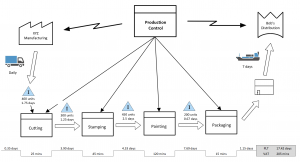 Value stream mapping is the core concept of lean manufacturing that is inherited by Lean Six Sigma.  The production plant is “mapped” into all the processes that occur to produce the finished product.  Each step is drawn on a value stream map.  At the bottom of the map, the Production Lead Time (PLT) and the Value Added Time (VAT) are plotted for each step, which tracks the amount of time within each production step the product is idling in inventory without being worked on in a value added way.  Click on the sample Value Stream Map to the right to expand it.

The map is a living document that is continually consulted to determine the next improvement project.  Each step is scrutinized to create the maximum amount of “flow”, and anything that stops the products from moving through the value added production line is waste, or “muda.”  VAT should be maximized, and PLT should be minimized.

Once the value stream is defined the focus shifts to monitoring and controlling the the key metric in Lean, which is Cycle Efficiency. 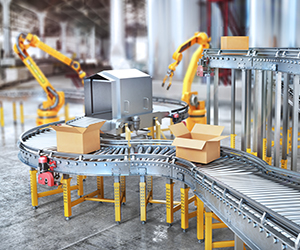 In a lean facility, product moves from raw material to finished good in the least amount of time.  This eliminates inventory between production stations and allows the plant to rapidly switch product variants and/or adjust to changes in customer orders.  It also minimizes the time between purchase of raw material and selling of the finished product, which can result in large one-time profits at the time the system is implemented.  Unnecessary wait times between or at production stations are considered muda and must be aggressively eliminated.  A lean factory has a small footprint because there is not much inventory waiting to be manufactured, hence the term “lean.”

The central measurement of the effectiveness of the Lean plant relates the amount of time spent on value added production on a product to its overall time moving through production.

Typical cycle efficiencies for various types of processes are:

The goal is 100% cycle efficiency, which means that the product is being worked on in a value added way right from the point it enters the facility as raw material to when it exits as a finished good.  But realistically, cycle efficiency will never be 100% except for very simple processes with few production steps.

The implementation process of Lean Six Sigma in a new organization is inherited largely from the Six Sigma side, because it is much better developed.

Once the black belts and green belts are certified and ready to get to work on process improvement, specific projects can be identified.

Selecting the right Lean Six Sigma process improvement projects is the key to a high Lean Six Sigma success rate.  Black belts are released to measure and analyze the cycle efficiency of the organization’s processes.  They perform Design of Experiments (DOE) to determine where process improvements are warranted.  They analyze the data to determine the financial cost/savings as well as the effort required.

Lean Six Sigma projects are assembled and ranked according to priority, that is:

Those that have the best return for the least effort become the highest priority.

Lean Six Sigma inherits the DMAIC acronym from Six Sigma.  DMAIC represents the process which green and black belts go through to implement an improvement project.  DMAIC stands for:

As you can see, Lean and Six Sigma are tremendous compliments to each other.

Producing high quality products and services is important, and delivering them quickly is equally as important.  But those who produce high quality, quickly, will reap the rewards.