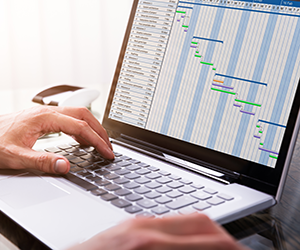 A Gantt chart is a graphical depiction of a project schedule in which project task durations are shown as horizontal bars.

Gantt charts are the easiest and most intuitive way to communicate a project schedule.  They are created as part of the Project Management Plan, and give stakeholders an instant picture of what the project is set to accomplish, and when.  But they have a few inherent weaknesses, which the project manager must be aware of to use them most effectively.

Parts of a Gantt Chart

To be considered a Gantt chart, as a minimum it needs to have a task list with bars showing start and end dates for each task.  But most professional project managers utilize the power of a Gantt chart by including other components. 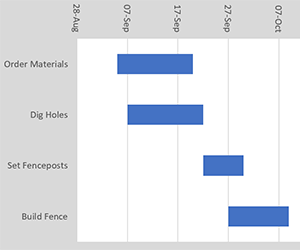 These are the parts of a Gantt chart:

In Project Management lingo, the task list is called a Work Breakdown Structure, usually abbreviated WBS.  Dividing a project into constituent tasks is the first component of project management, in all three major project management methodologies (PMBOK, PRINCE2, and IPMA).

It may seem trivial, but a strong WBS is the foundation for all other project management and control functions.  If the tasks are too small, they risk inefficient micromanagement.  If they are too big, they lose the benefit of project control.  Ideally, each task should be between 8 and 80 hours of work.

The durations of each task are estimated using the two main estimation techniques:

These are combined with three point estimating.

Each task estimate is rolled up into the overall project estimate using either Top Down or Bottom Up Estimating. 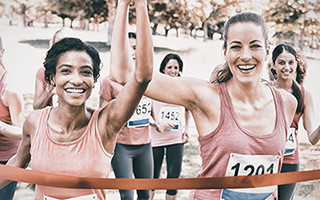 Project milestones are similar to tasks, except that they have no duration.  They are like the finish line that the marathon runner runs through.

At any given time, the project has either achieved the milestone, or has not.

On the Gantt chart, milestones can be represented with either:

Here is an example of a milestone on a Gantt chart, using Microsoft Project:

The overall project completion date is a milestone – Nothing more, nothing less.  But it is unique in that it is the last milestone, which represents the completion of all project activities.

Since the very definition of a project is as a temporary endeavor, with a finite beginning and end, the project completion date is almost always an important consideration in project success.

The project completion date is very easy to see on most Gantt charts, and indeed, most stakeholders’ eyes wander into the bottom right corner of the chart relatively quickly.  This visualization of the project is one of the strongest aspects of Gantt charts.

In a perfect world, all tasks of a project are dependent on one another.  If they weren’t, they wouldn’t be a part of the project.

For example, you can’t start the party until the cake is done.

In fact, this demonstrates the most common type of task dependency.  And since project managers are generally not show business types, we call it simply, Finish-to-Start.  That means that the task cannot begin until the prior task completes.

There are four types of dependencies:

On the Gantt chart, task dependencies are shown as an arrow from one task to the next.  Here is a typical Finish-to-Start dependency from Microsoft Project:

Another common scenario is that the Gantt chart leads to inefficient utilization of resources.  For example, let’s say you need an Excavator for tasks in week 1 and in week 3.  You should probably consider moving the two tasks closer together, and sacrificing other timelines, resources, or budgets to avoid having an idle excavator at the site.  Again, the Gantt chart does not readily show you this inefficiency.

It’s a bit cumbersome, but it allows for better visualization of the important resources.

Time is money.  In business, and especially in project management, these two factors are inexplicably linked.  They are joined at the hip.

Each task has a budget, and if the actual completion date of the task is late, the budget is also most likely exceeded.  For this reason, it is extremely important for the project manager to:

Therefore, the budget is often displayed on Gantt charts.  It can be displayed as either a separate column beside the task list, or beside the bars.  Of course, those are the same two places where the resources are shown (see above) so one must be careful to display the information that you wish where you want it on the gantt chart.

Good luck with your Gantt charting, and let me know about your tips and tricks in the comments section below.

How to Create a Gantt Chart in Excel

The Complete Guide to Gantt Charts